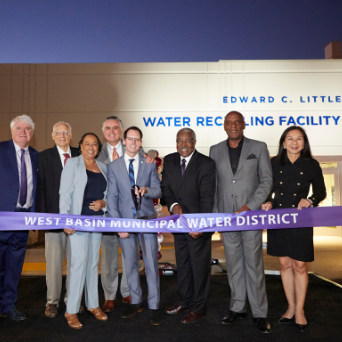 The completion of enhancements to the Water Education Center at the Edward C. Little Water Recycling Facility (ECLWRF) in El Segundo was celebrated with a grand re-opening ceremony on October 3, 2019. Over 300 community members, elected officials, water professionals, and members of the environmental community attended the event.

Distinguished speakers of the evening included keynote speaker Congresswoman Grace Napolitano, a video message from Los Angeles Mayor Eric Garcetti, the LA Sanitation & Environment (LASAN) Director and General Manager Enrique Zaldivar, and the Metropolitan Water District of Southern California General Manager Jeff Kightlinger. Mayor Garcetti’s video recognized West Basin for its innovation and environmental stewardship through the development of its recycled water program. The facility has demonstrated a successful partnership in sustainability and environmental protection with the City of Los Angeles over the past 25 years.

“West Basin is proud of its role as a leader in recycled water, and our newly renovated Water Education Center will once again welcome members of the public and water professionals to learn about the work of our District and our longstanding commitment to provide a sustainable supply of water to our communities,” said West Basin Board President Scott Houston.

The enhanced Water Education Center is adjacent to the facility and the water quality lab. It includes interactive exhibits and conference rooms that nearly double the capacity to enhance the water-education experience for visitors of all ages. The remodel also includes an upgraded lobby, electric vehicle parking, and additional parking spaces to accommodate more visitors. Since the facility’s opening in 1995, over 100,000 local school students, college groups, international delegations, trade groups and professionals have visited the facility for tours, presentations and field trips. With the refreshed education exhibits, visitors will be able to gain a deeper understanding of the recycled water process.

The Water Education Center had been closed to the public since 2018 for the renovations, and is scheduled to reopen for public tours and presentations in January 2020. The facility will also be available for use as a public meeting space for community groups and professional/industry organizations. The facility is expected to ultimately attract up to 20,000 people each year and will be the hub for recycled water education in the region.

For photos of the Water Education Center and Grand Re-Opening Ceremony, visit: westbasin.org/10-3-19-ECLWRF-reopening-photos. 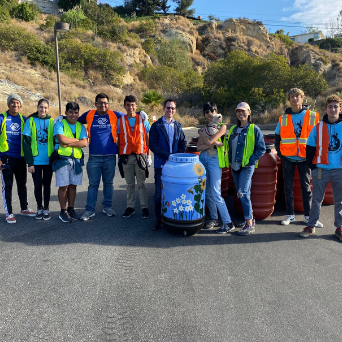 West Basin is hosting its popular rain barrel giveaways in a series of free distribution events, offered to qualified District residents as part of its water conservation program. The 55-gallon eco-friendly rain barrels help residents collect rainwater to use for landscaping and prevent runoff to storm drains.

The first distribution event in the program series took place in Malibu on Saturday, November 2. Additional distribution events will be offered throughout the South Bay through spring 2020. The remaining event dates are scheduled for November in Carson, January in El Segundo, and February in Hermosa Beach, with upcoming dates for Gardena and Inglewood soon to be announced. All events are scheduled to begin at 8 a.m. and end at 11 a.m.

Since its inception, the water conservation program has helped the District to conserve more than 167 billion gallons of water through the distribution of more than 300,000 water-saving devices. Each of the District’s water conservation programs allows businesses and residents throughout its service area to take an everyday approach to water savings. West Basin has given away more than 6,000 free rain barrels to local residents, valued at approximately $50 per unit.

For the full list of event dates, locations, eligibility guidelines, and to RSVP for the event closest to you, please visit www.westbasin.org/rainbarrels. 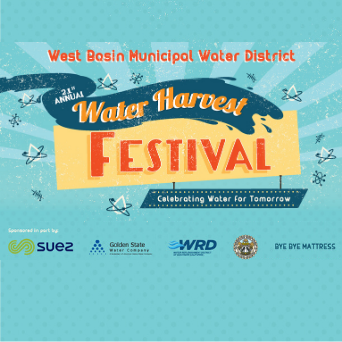 The morning of the festival, the West Basin Board of Directors hosted the festival’s annual awards breakfast and ceremony inside the Water Education Center. Five local organizations and individuals who have showcased their commitment to securing our region’s water future, each representing one of West Basin’s five service area divisions, were recognized.

The 2019 Water for Tomorrow award recipients are: 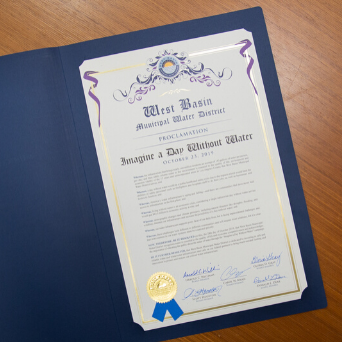 West Basin joined elected officials, water utilities, community leaders, educators, and businesses from across the country as part of the fifth annual Imagine a Day Without Water, a nationwide day of education and advocacy about the value of water. Led by the Value of Water Campaign, a thousand organizations across the country raised awareness about not taking water for granted and the crucial need for investment in our nation’s water systems.

West Basin participated by sharing campaign messaging on social media and the Board of Directors issued a proclamation at its monthly meeting on October 28 in support of the campaign.

“West Basin is proud to once again join organizations and individuals nationwide on Imagine a Day Without Water to call attention to protecting our Earth’s most precious resource and the continued need for critical water infrastructure funding,” said West Basin Board President Scott Houston. “In this our third year of participation, the campaign aligns with West Basin’s mission to supply safe and reliable water to the communities we serve.” 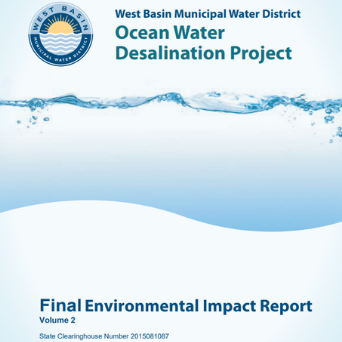 A Draft EIR, published in the spring of 2018, evaluated the possible impacts of constructing and operating the proposed project. The report also identified mitigation strategies to avoid, minimize, or compensate for any environmental impacts. During the public comment period, West Basin received 213 comments. The Final EIR provides detailed responses to each of these comments, in accordance with the California Environmental Quality Act (CEQA). 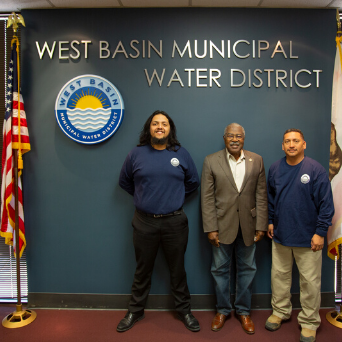 In honor of Veterans Day on November 11, the District recognizes West Basin Division I Director Harold Williams and employees Sergio Nunez and Isaiah Suarez for their service in the United States military.

Director Williams joined the U.S. Army in 1960, where he would fulfill a 6 year term as an ordinance specialist, working in Germany for two of those years. “I was happy to serve and would do it again,” said Director Williams, who is serving his second term on West Basin’s Board of Directors.

Nunez, an Operations Technician at West Basin, served in the U.S. Army for 23 years, as a combat engineer, and later, a construction supervisor. While stationed in Fort Bragg, Nunez served a total of 10 tours and traveled to Thailand, Afghanistan, Kuwait, Philippines, and Bosnia. Nunez has been with West Basin for two years.

A former member of the U.S. Air Force, Suarez worked in security forces for seven years, handling law enforcement and base security at Edwards Air Force Base in Kern County. Suarez, who toured in Iraq and Kuwait said, “Working in the military taught me discipline, loyalty and how to work with people of all different backgrounds.” Suarez is a Senior Information Technology Analyst at West Basin and has been with the District for one year.