The West Coast Groundwater Basin (Basin) underlies 160 square miles in the southwestern part of the Los Angeles Coastal Plain in Los Angeles County. The Basin extends southwesterly along the coast from the Newport-Inglewood Uplift to the Santa Monica Bay. The Basin provides groundwater to approximately eleven cities and unincorporated areas of Los Angeles County. This average annual production is roughly 52,000 Acre-feet (AF), which accounts for 20% of total retail demands. 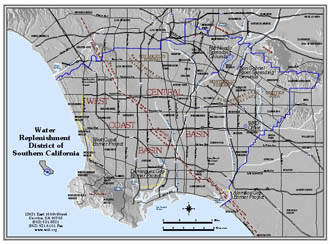 In 1961, the Basin was adjudicated. The adjudication limits the allowable annual extraction of groundwater per water rights holder within West Basin in order to prevent seawater intrusion and an unhealthy groundwater level. As part of the adjudication, the court appointed the California Department of Water Resources (DWR) to serve as Watermaster to account for all water rights and groundwater extraction amounts per year.

Since the adjudicated groundwater production is substantially higher than the natural recharge of the Basin, the California State Legislature in 1959 created the Water Replenishment District of Southern California (WRD) to manage, regulate and replenish the Basin. Each year WRD determines the amount of supplemental recharge that is needed for the Basin based upon annual groundwater extractions and groundwater levels. As part of the recharge and protective duties, WRD procures imported water and recycled water for the West Coast Basin Barrier Project and Dominguez Gap Barrier Project to prevent seawater intrusion.

Through the coordination of the Los Angeles County Public Works Department, DWR, and WRD, the West Coast Groundwater Basin is managed and maintained to provide the utmost water quality and reliability for the region.

For further information on the West Coast Groundwater Basin please visit the Water Replenishment District’s website at http://www.wrd.org and the California Department of Water Resources at https://water.ca.gov/Water-Basics/Groundwater.