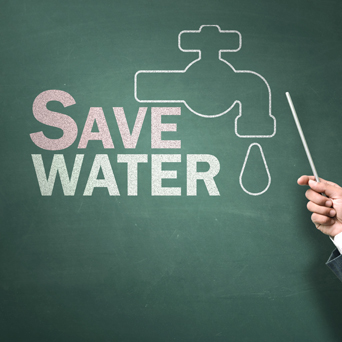 The Drought Emergency Is Over – Now What?

For West Basin Municipal Water District, encouraging conservation as a way of life and continuing to prepare for future water challenges is essential to securing water reliability for its communities.

“This drought emergency is over,” declared Governor Jerry Brown, when he issued Executive Order B-40-17 on April 7, “but the next drought could be around the corner.” For this reason the governor permanently prohibits wasteful water practices and maintains urban water use reporting requirements. Additionally, legislative efforts to ensure long term water conservation are underway.

The lessons from this drought emergency are not lost, and the West Basin service area has made great strides in conservation. Since June 2014, when the State-mandated conservation reporting began, West Basin’s customers have conserved over 18 billion gallons of water; enough water to serve over 460,000 people for one year. Through West Basin’s water efficiency programs to date, the District has conserved more than 167 billion gallons of potable water.

However, West Basin urges the service area to keep saving water rain or shine. Recent climate conditions show that there is no “normal” in today’s climate. California’s recent historic five-year drought included record-high temperatures, record-low precipitation and, as a result of recent winter 2017 storms, one of the highest precipitation totals on record.

And while this year’s record rains finally brought drought relief, the likelihood of recovering from the extreme dryness of 2012-2015 within two years is effectively 0% for our South Coast region, according to the Nation Centers for Environmental Information. At the same time, previous tree ring studies by the California Department of Water Resources suggest California’s climate has experienced droughts lasting decades, even centuries, also known as “megadroughts.”

According to a study led by UCLA professor Glen MacDonald, an authority on drought and climate change, more intense and prolonged aridity in California is anticipated. “We would expect temperatures to get higher, and rainfall and snowfall would decrease,” said MacDonald, as stated in a UCLA Newsroom story. “Fire activity could increase, and lakes would get shallower, with some becoming marshy or drying up.” 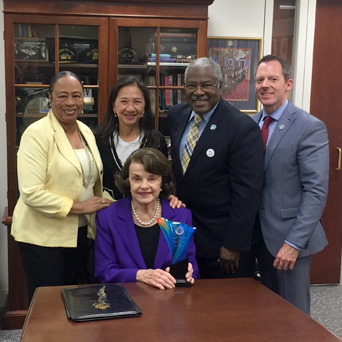 The West Basin Board of Directors recently met with U.S. Senator Dianne Feinstein in Washington, D.C. to provide a briefing on West Basin endeavors and present her with its annual Legislator of the Year award.

In 2016, Feinstein was instrumental in leading a bipartisan coalition to support passage of the Water Infrastructure Improvements for the Nation Act (WIIN Act), which includes drought legislation and amendments to the Water Resources Development Act (WRDA).

Through WRDA, water supply projects are authorized to be studied, planned and developed by the U.S. Army Corps of Engineers (USACE). The WRDA legislation will supply funding for USACE, as well as the Title XVI, which provides authority for the Bureau of Reclamation’s water recycling and reuse program, in partnership with local government entities. 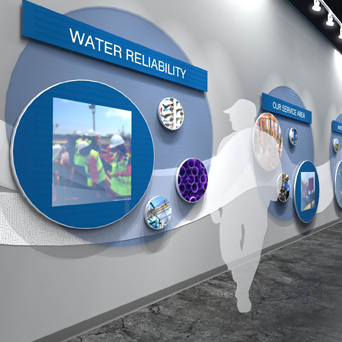 As part of West Basin’s Capital Improvement Program (CIP), the Edward C. Little Water Recycling Facility (ECLWRF) is undergoing a number of enhancements this year. The CIP consists of multiple projects under construction, in design, or in the early planning stages. The CIP enables West Basin to reach new milestones for production and reliability.

The improvements ensure West Basin maintains continuous production for the barrier system and customer boiler feedwater systems. It also ensures West Basin continues to be in compliance with the brine permit issued by the Regional Water Quality Control Board.

In addition, West Basin recently approved the architectural design for the ECLWRF Visitor Center renovation. The project includes expansion of the facility’s public meeting spaces and visitor center exhibit gallery. The conference room will be enhanced to a 140-person capacity. Construction is anticipated to be completed next fall. 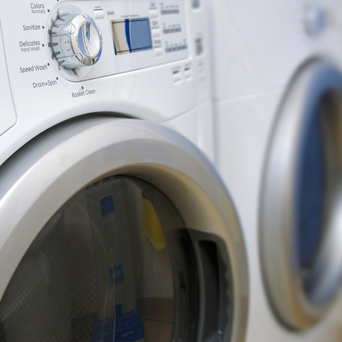 West Basin recently received a total of $800,625 through the California Department of Water Resources (DWR) 2016 Water-Energy Grant, which includes funding for a new water conservation program, as well as augmentation to an existing program.

West Basin’s new program, the Disadvantaged Community Water-Energy Savings Initiative Program (DAC) program, will focus on reducing water and energy usage in disadvantaged communities by installing water and energy efficient devices, such as front-loading washing machines. Eligibility is based on areas identified as earning less than 80% of the statewide median household income. 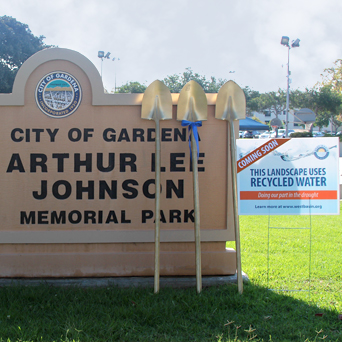 After less than a year of construction, with the help of the local workforce, the South Gardena Recycled Water Pipeline Project (Project), which will provide recycled water to Arthur Lee Johnson Memorial Park, Gardena High School and Roosevelt Memorial Park, is complete.

West Basin, the city of Gardena and the Los Angeles Department of Water and Power (LADWP) collaborated on building the 1.2 mile pipeline, which will provide 105 acre-feet per year of recycled water, and save 95,040 gallons of potable water daily.

Before recycled water service can begin, the owners of the sites, including the city of Gardena, the Los Angeles Unified School District (LAUSD) and Roosevelt Memorial Park, must first modify the sites. The modifications are made with technical assistance from West Basin and LADWP.

West Basin worked with the Los Angeles/Orange Counties Building and Construction Trades Council to develop a Project Labor Agreement (PLA) to utilize the local workforce, among other directives. The Project’s PLA exceeded goals for participation of local and veteran workers.