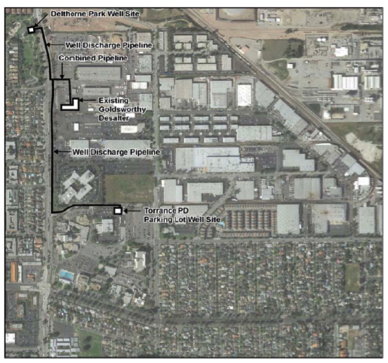 The project will allow the City of Torrance and the WRD to expand the treatment capacity of the existing Desalter and increase the delivery of locally‐produced safe drinking water in the West Coast Basin (WCB). Construction components include: (1) two new wells that will be drilled in locations with high chloride brackish groundwater, (2) wellhead facilities, (3) a pipeline to convey brackish groundwater to the Desalter, (4) the installation of high‐efficiency reverse osmosis (RO) treatment equipment to expand the desalination capacity from 2.5 MGD to 5 MGD (or 5,000 AFY based on actual operation, including shutdown periods), an increase of approximately 3,514 AFY, and (5) upgrades to the existing RO equipment and electrical and mechanical systems. 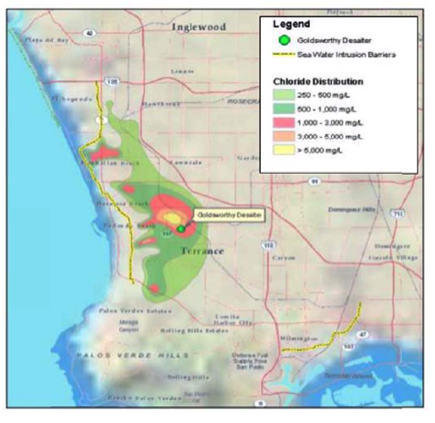 In addition, a new flushing line from the project will be constructed to divert flows that currently go to Santa Monica Bay (Bay) to discharge in the Dominguez Channel. Diversion of these discharge flows from the Desalter will reduce bacteriological contamination to the Bay. In the early half of the 20th century, groundwater extractions in the WCB caused severe overdraft and the lowering of groundwater elevations to over 100 feet below sea level. In 2002, the Desalter was constructed as part of a regional program intended to remediate the high chloride groundwater plume and increase the local water supply in the WCB that was trapped when the seawater intrusion barriers began operation.

Pictures: Maps showing the location of the project in relation to the brackish groundwater plume. 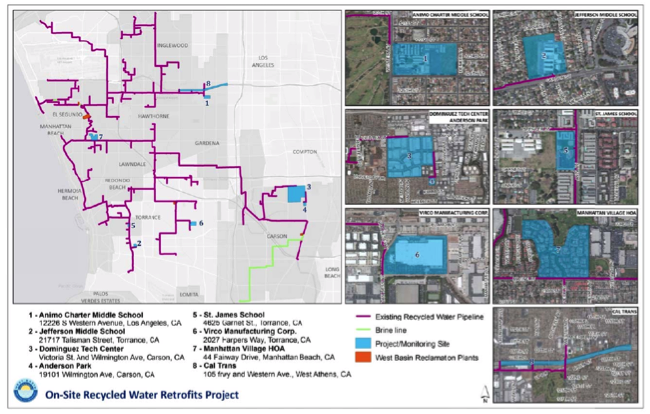 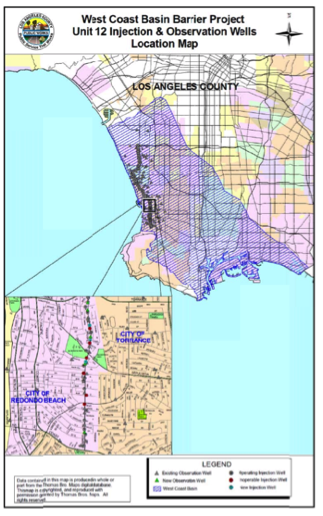 LACFCD, as part of the West Coast Basin Barrier (Barrier) Project (WCBBP), will construct three new injection wells to inject 100% advanced treated recycled water into the West Coast Basin. The project will increase the current injection capacity by 724AFY to replenish local groundwater supply and protect groundwater quality from contamination due to seawater intrusion. The new wells will replace three existing injection wells that are no longer operable due to irreparable damage to the well casings. The reduced injection in this area has caused a weakening in the Barrier. The project will also include construction of five new observation wells to measure groundwater and chloride levers near the Barrier, and to monitor the effectiveness of the injection. LACFCD owns an existing water supply pipeline with sufficient capacity that will be used to provide the recycled water for injection. The additional recycled water will be purchased by the WRD and from WBMWD. 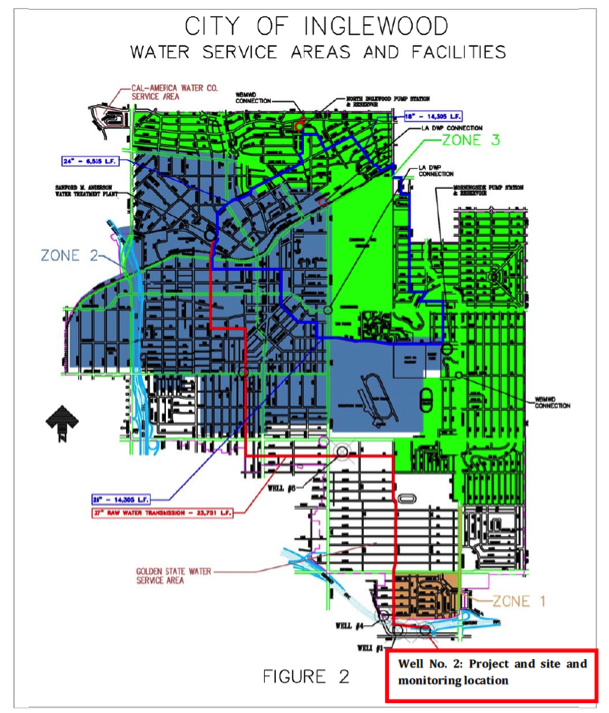 This project will rehabilitate the existing City Well No. 2 to restore production to previous levels. The well rehabilitation will include removal of the pump assembly, removal of well encrustation through wire brushing, jetting, removal of swab, BoreBlast, and chemical treatment of the well casing. After rehabilitation, the well will be tested to determine its potential yield. Based on previous rehabilitation work performed on Well No. 2, an estimated average of 400 AFY or 248 gpm could be produced over a period of seven years before rehabilitation may become necessary again. The additional groundwater pumped at this well will be conveyed, treated and distributed using existing infrastructure.