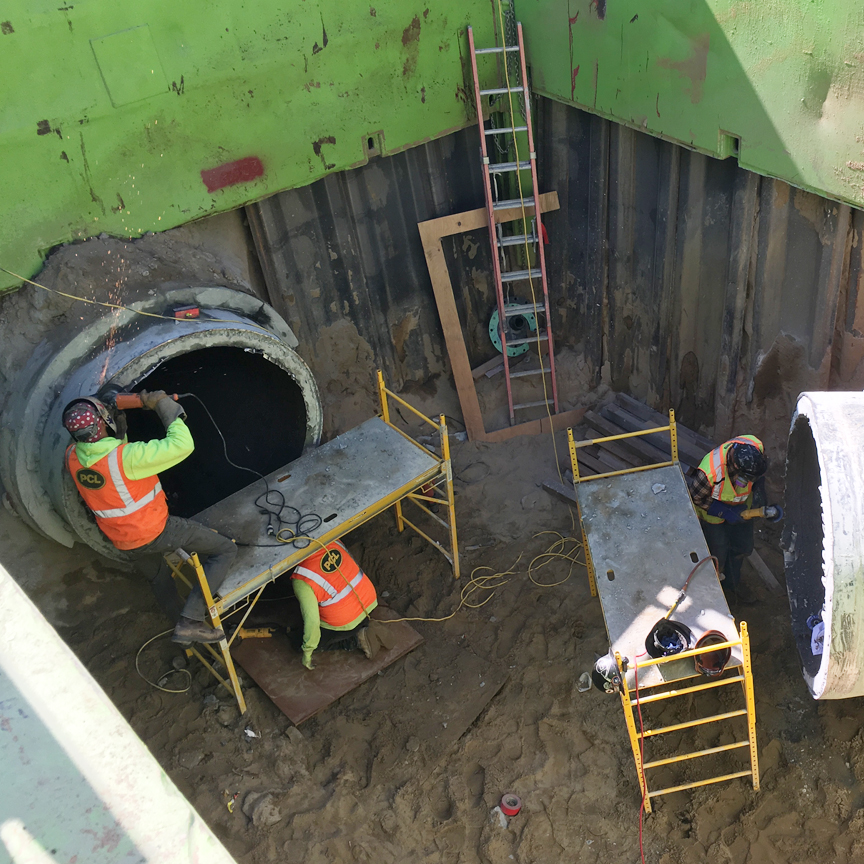 After more than a year of planning, West Basin completed the Hyperion Pump Station Reliability Project’s seven-day shutdown of the recycled water program. The purpose of the shutdown was to install a wye section in a five foot diameter force main with the purpose of eventually tying in an expanded pump station currently being built at the nearby Hyperion Water Reclamation Plant.

West Basin staff took advantage of the opportunity to complete several capital improvement projects, inspections and preventative maintenance activities across all of its recycled water facilities. The shutdown began on February 25 and was completed three days early, thanks to staff’s planning and management, as well as coordination with partners such as the City of Los Angeles, City of El Segundo and the Los Angeles Bureau of Sanitation.

West Basin sources secondary effluent water for its water recycling program from the neighboring City of Los Angeles’ Hyperion facility. By expanding the pump station and installing a back-up generator at the Hyperion plant, West Basin will have the capacity to increase recycled water production up to 70 million gallons of water per day (MGD) as downstream demand continues to grow.

The improvements reinforce the District’s commitment and ongoing investment efforts to increase water reliability by diversifying and augmenting local water supplies, as well as increasing drought resiliency and sustainability, which prepares the District for the needs of tomorrow. 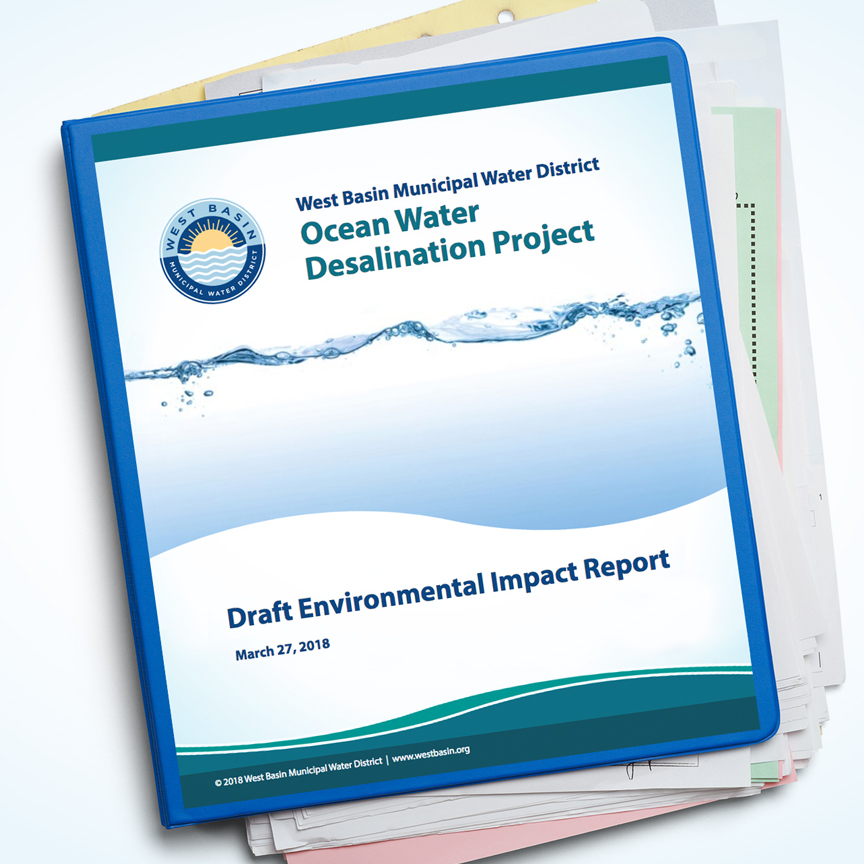 On March 27, the District released a draft environmental impact report (EIR) that examines a potential West Basin Ocean Water Desalination Project that would produce 20 or 60 MGD of potable drinking water from the ocean. The report is available online at www.westbasin.org/desal. A public meeting was held April 25, where nearly a hundred people from the community attended to learn about the project and comment on the draft EIR.

A second public meeting for the community to learn about the report findings and ask questions about the draft EIR is scheduled on Saturday, May 12, 2018 from 10 a.m. – 1 p.m. at the Richmond Street Elementary School Auditorium (615 Richmond St., El Segundo, CA 90245). Community members will also be allowed to submit public comment at this time.

The draft EIR public comment period closes on Monday, June 25, 2018 at 5 p.m. Comments may be submitted at the public meeting, in writing or via e-mail at desalEIR@westbasin.org, or delivered to the West Basin Municipal Water District Office (17140 S. Avalon Blvd., Carson, CA 90746) before the closing date. 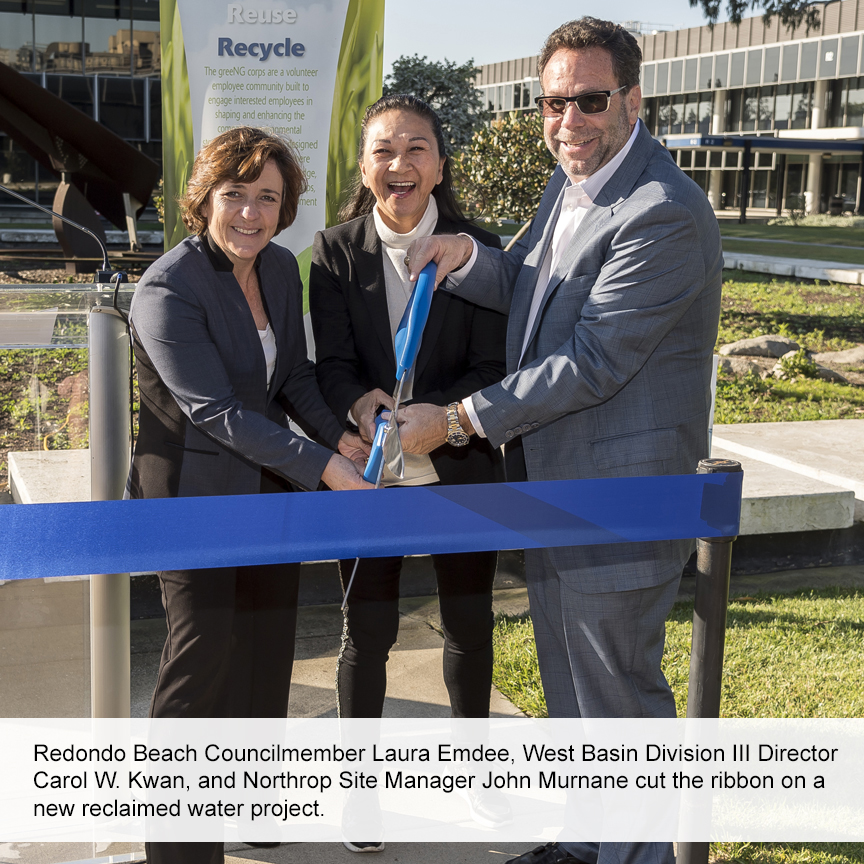 West Basin and Northrop Grumman Corp. announced on Feb. 16 the beginning of a pilot project that will use recycled water for three cooling towers located on the company’s Redondo Beach facility. By using West Basin’s locally-produced recycled water, Northrop is initially projected to save up to 16 million gallons of drinking water per year.

West Basin is the only agency in the world with the ability to provide five different types of custom-made recycled water that have undergone various advanced treatment processes to meet the specific needs of public, commercial, and industrial users. The West Basin Edward C. Little Water Recycling Facility in El Segundo provides 40 million gallons of recycled water each day to more than 200 sites throughout its 185-square mile service area. In addition to providing a reliable, drought-tolerant water supply, the District’s recycled water customers can save an average of 20-30 percent off their water bill for irrigation, cooling or industrial water use. 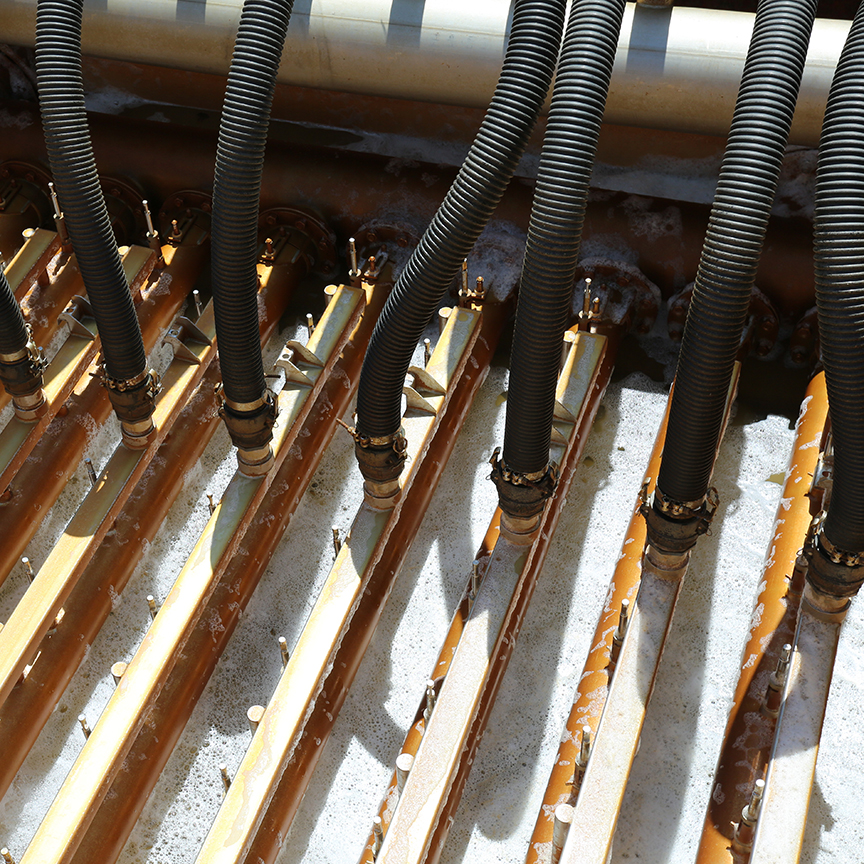 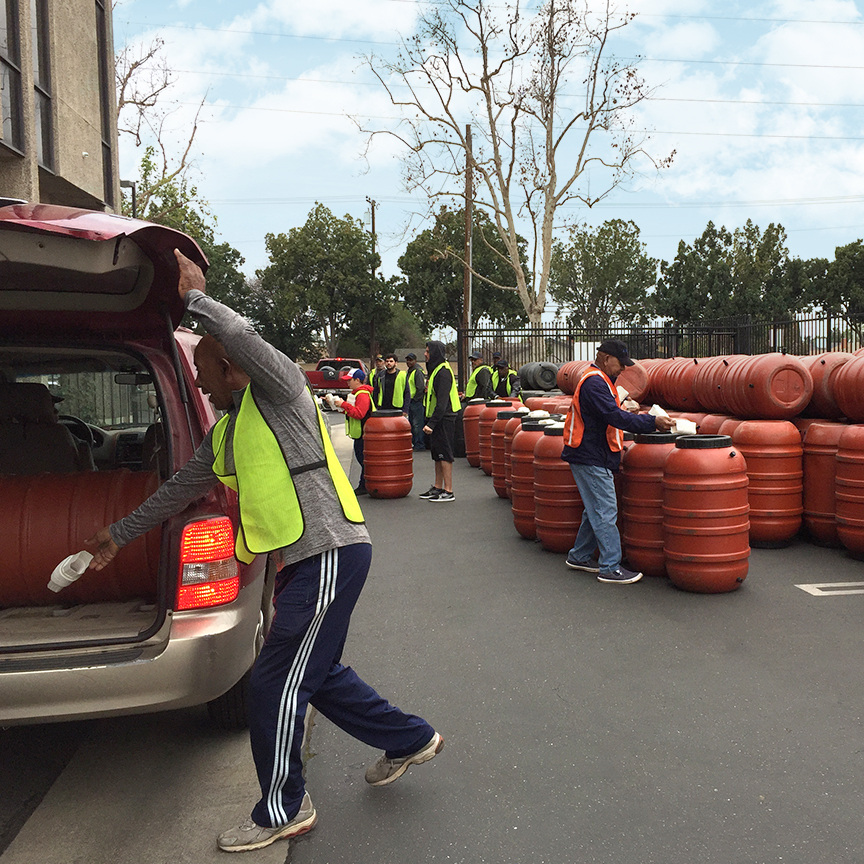 West Basin’s popular free rain barrel program has provided residents with more than 1,600 rain barrels in 2018, with the final event scheduled on May 19 in Inglewood. Rain barrels allow residents to collect and use rainwater in their gardens, promoting water efficiency and reducing water flowing into storm drains and waterways.

To RSVP for the final rain barrel event, visit www.westbasin.org/rainbarrels.