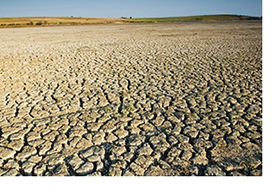 California’s record-breaking drought will likely persist in many parts of the state this winter and could intensify in some areas, according to a three-month winter forecast by the National Weather Service’s Climate Prediction Center. Drought conditions are expected to improve in California’s southern and northwestern regions, but complete drought recovery in California this winter is highly unlikely as the remainder of the state is expected to remain unseasonably dry.

Over 80% of California is suffering from exceptional drought and California has experienced exceptionally warm weather. The first 7 months marked record dry temperatures and 2014 is shaping up to be one of the warmest recorded. Reservoir levels remain at all-time low levels. Governor Brown announced that water policy will be a top priority during his term with Proposition 1 and has confidence that Californians will embrace conservation. West Basin’s residential water use has decreased by more than 13% since June 2014. Los Angeles Mayor Garcetti has issued an executive order to conserve water and reduce water imports. The directive requires the city to achieve a 20% reduction in potable water by 2017. 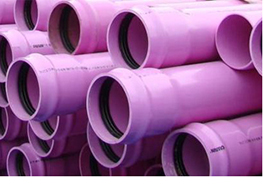 West Basin began recycling water following the droughts of the late 1980s and early 1990s. At that time, the West Basin Board of Directors embarked on a program to diversify its water supplies by adding recycled water and conservation efforts to its water supply portfolio. We look forward to continuing to produce more recycled water to provide this drought-proof supply of water for coastal Los Angeles County. 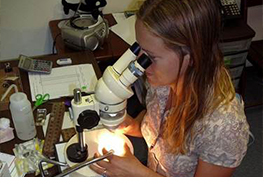 West Basin’s Ocean-Water Desalination Program has been continuing to make strides in researching responsible ocean-water desalination. It was recently awarded $150,000 for a Subsurface Intake Study by USBR through their Water Purification and Desalination grant program. This study will help to identify all subsurface intake technologies and develop a guidance manual that can be used by anyone interested in learning if subsurface intake is a viable option for a desalination site. Once the guidance manual is developed, West Basin will be performing several off-shore and on-shore field tests to determine the feasibility of these technologies.

West Basin has been leading ocean-water desalination research since 2002 and built a temporary desalination demonstration facility in 2010 at SEA Lab in Redondo Beach to perform numerous ocean protection and operational research studies. To read more on the studies see here. 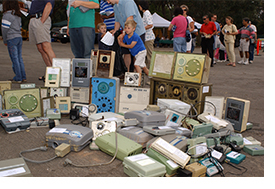 As Southern Californians brace for another possible dry year ahead, West Basin will continue to provide South Bay residents an array of programs, rebates and incentives, classes and water-saving devices to assist them in this drought. West Basin was one of the first to increase its conservation efforts since the last major drought of the late 1980’s & early 90’s.

Since 1994, West Basin’s toilet exchange program has distributed over 43,000 water-saving toilets that are conserving over 409 million gallons per year, enough water to sustain 2,500 families per year. Most recently, it launched a new rain barrel pilot program and provided over 600 free rain barrels to residents. This program was so successful that West Basin extended the program and plans on providing another 1,000 rain barrels in the coming winter. In total, West Basin has distributed over 300,000 water conserving devices. See how you can participate here.

West Basin Board of Directors Celebrate Passing of Water Bond

The West Basin Board of Directors is pleased with the passing of Proposition 1, the “Water Quality, Supply and Infrastructure Improvement Act of 2014, that passed with a yes vote of 69.88%. In August, the Board voted to adopt a formal “support” position on the $7.12 billion water bond measure because it includes much needed funding for new water storage projects, regional water projects, sustainable groundwater cleanup and management programs, water recycling, water conservation, and safe drinking water programs.

Supported by a diverse group of organizations – including water, agriculture, labor, business and conservation groups – Proposition 1 will certainly help with the current and future droughts. The Proposition will have programs that West Basin is eligible to compete for in the areas of recycling, conservation and other water supply programs.

Thank you to everyone who supported and attended Water Harvest! We couldn’t have made it a huge success without our gracious donors and sponsors, booth participants, volunteers and staff. We had more than 1,600 people in attendance and nearly 400 guests toured the Edward C. Little Water Recycling Facility. With all of the attractions and booths, the day was filled with learning, laughter, fun and most importantly, information on how we can all conserve water in this drought and for the future!
Congratulations to all our raffle prize winners and our lucky grand prize winner from Hawthorne (Division 5), who took home a brand new energy efficient washer and dryer. If you missed out on all the fun at this year’s Water Harvest, check out our Facebook page to see all of the pictures from the event and don’t forget to share yours as well. See you next year.

Half a Million Dollars for Saving Energy and Water 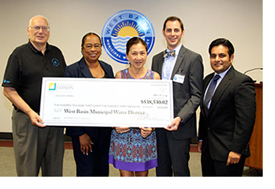 West Basin was awarded half a million dollars by Southern California Edison for implementing energy-efficient improvements – which exceeded normal industry standards for energy efficiency – during its most recent expansion of the Edward C. Little Water Recycling Facility (ECLWRF). The annual energy savings for the project is equivalent to reducing approximately 5.2 million tons of carbon dioxide from the atmosphere.

In the past, West Basin received an incentive to cover nearly half the cost of its solar panel installation which provides approximately 10% of the power for the recycling plant. West Basin has also received rebates to perform pump efficiency tests to improve the plant’s energy performance. The Southern California Edison incentives total almost $2.3 million and the resulting power savings is ongoing. We are thankful for our partnership with Southern California Edison, which allows us to continue to implement sustainable and energy efficient solutions at the facility. West Basin is featured on SCE’s YouTube site at:

The Hermosa Beach Ocean Friendly Garden Ribbon Cutting is scheduled for Wednesday, November 26, 2014 at 10 a.m. at 710 Pier Ave. Hermosa Beach, CA 90245. The public is welcome to attend and see first-hand how to implement California Friendly plants into their own landscapes and save almost half of their current water usage. 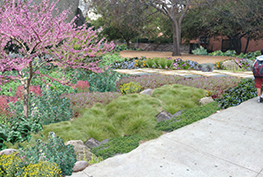 Cal State Dominguez Hills will host one of the largest California Friendly Landscape gardens in West Basin’s service area. This garden was built in student housing and will be a welcomed addition for residents and visitors. Construction was just completed so stay tuned for more photos as the garden fills in. 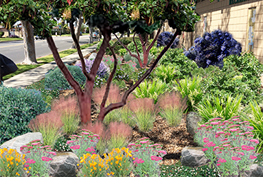 Students will receive hands-on learning as they help build and maintain this Ocean Friendly Garden on campus. Students have already attended a workshop to learn more about California Friendly landscapes. 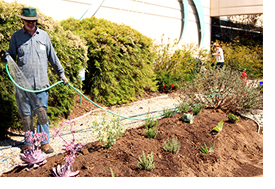 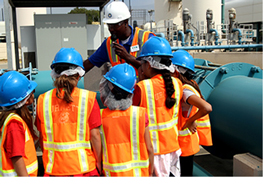 Located in the City of Gardena, this garden in in the process of being built and will be a great addition to this beautiful park.

One of West Basin’s first gardens recently got a makeover.

October kicked-off West Basin’s annual school tour programs with a series of award-winning Water Explorations Tours. Water Explorations brings 3rd-12th grade students to the Edward C. Little Water Recycling Facility where they explore California’s water supply, the water cycle, and water conservation. Students also learn about water recycling through educational activities and a hands-on tour of the water recycling facility.
The Water Explorations tours continue at the Manhattan Beach Roundhouse Aquarium where students learn about the South Bay’s watersheds and how humans can have a positive impact on fresh and ocean water creatures and their habitats. West Basin’s education programs strive to inspire students to become water ambassadors in their local communities now and into the future.

Did you know West Basin offers free recycled water tours and water education classes to the public? Join us for our 2015 water education programs. Sign up now, please email info@westbasin.org or leave a message on our tour hotline at (310) 660-6243. 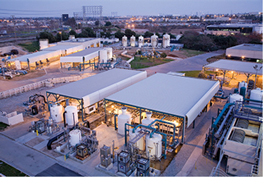 Come see how used wastewater can be purified to bottle water quality in 30 minutes! Visit West Basin’s water recycling facility – the only one of its kind that produces five different types of “designer” waters – to better understand the water purification process. Tours are reoccurring on the second Saturday of every other month. They begin promptly at 9:30 a.m. and last approximately 1.5 hours. All attendees must be at least 7 years of age and wear flat, closed-toe shoes. 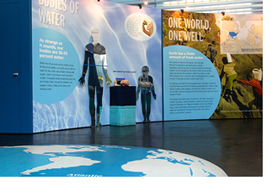 West Basin’s Water Education Center provides information on Southern California’s water supply and how West Basin’s diverse water supply portfolio is protecting the marine ecosystem and our enviable lifestyle. Tours are open to all ages and here you can learn all about one of the world’s future water supplies — ocean-water desalination. Tours last approximately one hour. 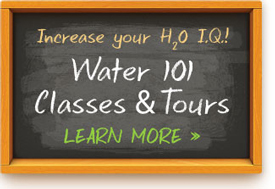 West Basin also provides a free Water 101 course on the ABC’s of water from a global, national and local perspective as well as a recycled water plant tour on the first and second Thursday of every other month in El Segundo and Carson. In Carson, the recycling tour is on video tape. Guests will learn more about where their water comes from and why it is so important to use water wisely. Light dinner is served at 6:30pm and the class is from 7:00 p.m. – 8:30 p.m. The class is highly recommended for people 18 years and older.

*Soles for Life: On the day of the class, if you wish to bring in a pair of gently used shoes for the Soles for Lifeorganization, we will give you a free conservation device! (1 device per person)

*Please note: All tour participants must wear flat, closed-toe shoes for the tour. 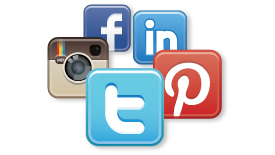 West Basin is excited to announce that you can now connect with us in more ways than ever before on Twitter, Instagram and Pinterest! With our latest social media expansion, you will receive the latest updates about West Basin, our activities in the community, and information about water conservation, landscaping, the drought, tours, events, contests and much more! Connect and share your experiences with us, we want to hear from you! 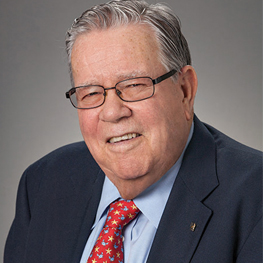 It was with the most sincere regret to inform the community that former West Basin Director Edward “Ed” Little passed away peacefully in August. One of Little’s most noteworthy achievements was his Board leadership in diversifying West Basin’s water portfolio. Little, more commonly known as “Ed,” led the Board effort to begin both wastewater recycling and water conservation as additional sources of locally-controlled water supplies. We are extremely thankful for Ed Little’s dedication, vision and leadership in the water community and at West Basin.

Recognizing his efforts, the West Basin Board of Directors in 2007 renamed its water recycling facility the Edward C. Little Water Recycling Facility in honor of his dedication to West Basin and its constituents. Little’s long-term vision has also contributed to the research and development of ocean-water desalination. The water community has lost a true hero. To read more about the life of Edward C. Little see here.